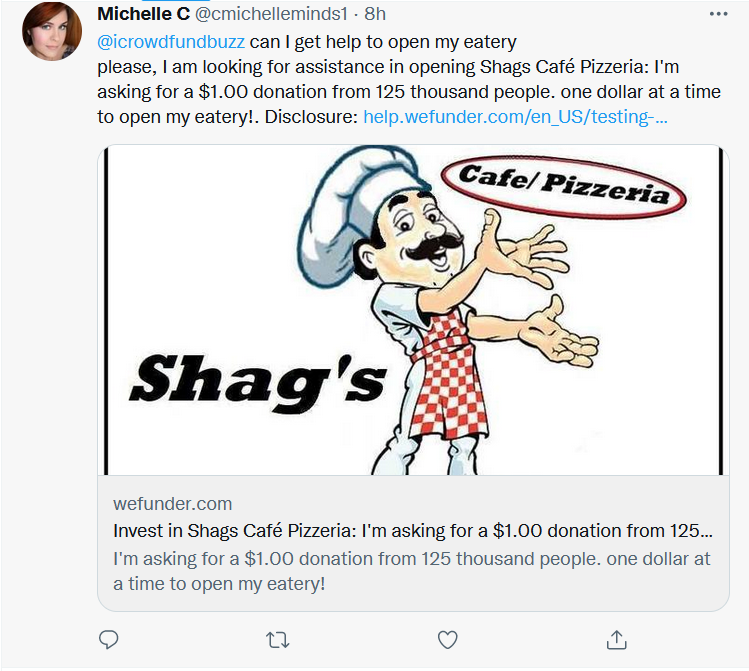 Crowdfunding Advertising Absurdities – From Too Little to Too Much Advertising

Over the years I’ve too often said “now I’ve seen everything.” and I really need to cut down when it comes to crowdfunding advertising absurdities.  For years I’ve been beating the drum of crowdfunders investing little or nothing on crowdfunding promotion and while I hold to that, I have encountered a new phenomenon; campaigns spending too much on crowdfunding marketing.  See what I mean by seeing it all?

I thought I was hallucinating. Somebody raising money on equity crowdfunding begging for free advertising from MY business so THEY can open a business to make a profit? WTF?!

Then there’s the proposition; $1 from 125,000 people. There would be better odds of success finding 125,000 virgin women on the Las Vegas Strip any night of the year.  How this shit show passed muster with WeFunder will remain a mystery.

Nobody should be surprised to learn that this crowdfunding campaign failed then disappeared with barely a trace.

As the old saying goes… if at first you don’t succeed, try try again…

#womeninbusinesscan you help with passing info to others to help me open my Brick and Mortar, Ty! we’re also offering donors gifts of appreciation! #womenowned #deliciousfood #makingfriends #feedingfamilies #womenentrepreneur#Creatingnewopportunities https://t.co/DhzQrKXpfE

Taking a look at her second attempt on GoFundMe a month later does not reveal surprising news.

Crowdfunding Advertising – Too Much

This crowdfunding campaign did very well on Kickstarter then moved over to Indiegogo Indemand – a solid crowdfunding promotion tactic to bring in more backers after the clock runs out. Running Google display ads for a crowdfunding campaign is a rare, bold move that could pay off.  In this case crowdfunding advertising absurdities are on full display; the ad spend is massive to reach people on two of the largest news websites in the world but the ROI just isn’t there.

Somebody is asleep at the wheel and must wake up before a ridiculous amount of money is wasted.

A balanced approach to crowdfunding promotion is best and nobody does it better than us.