How to Come out of Credit Card Debt Trap – 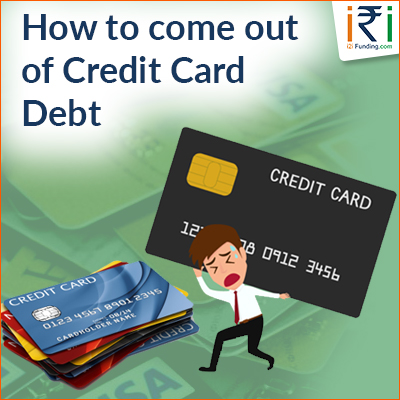 Tips to come out of Credit Card debt trap

Credit cards play an important role in current era of increasing digital transactions. However, if not handled carefully, credit cards have been seen to cause financial stress. Increasing number of people are falling into credit card debt trap. And once caught in this vicious cycle, it becomes really difficult to come out of it. It is good to get friendly advice on possible solutions. I have helped several people to come out of the Credit Card debt trap. After helping my friend Amit to come out of credit card debt cycle, I thought that I will share the experience so that it may be useful to others as well.

As a brief background, Amit is an ambitious and hard-working guy looking to make his future better. He works for a reputed IT firm and has a monthly salary of about Rs. 50,000. He used to save about 20,000 per month (40% of his salary) until he got his first credit card. This was about two and a half years ago when his bank offered him the card which he readily took as most of his friends already had one.

Like most of his peers, Amit also had fancy for cool gadgets, it made him feel good. He had set his eyes on iPhone from college days and not surprisingly it was the first thing he decided to buy after settling in the job. iPhone cost him about Rs. 50,000. He had three options, either dip into savings or save and then purchase or purchase on EMI. Had Amit purchased from his savings, he would have been immediately poorer by Rs. 50,000 and would have lesser money for more shopping. Same for the case where he saved and then purchased. Therefore, he chose to purchase on EMI to manage his cash flows and in addition was lured by interest free EMI (as advertised by card issuers and retailers) and cash back offer, unaware that this is a harmful financial behavior. He created a liability for an uncertain future and clearly ignored that there are no free lunches. Interest free EMI, even if it is there, is to inculcate spending more than one can afford.

The banks along with retail outlets lure customers with zero percent EMI and cash backs. Banks readily convert credit card outstanding into EMIs. Even a Rs. 2,000 purchase can be converted into EMI at a click as multiple “spend now pay later” schemes are being offered. I wonder if banks have any sense of fiduciary duty towards their clients. Credit card holders who are willing to convert such low amount are very likely to be unable to repay on time and the banks will enjoy exorbitant interest rates of 43% – 50% per annum at cost of these clients whom they lured with interest free EMI at the first place.

Same happened to Amit. He had taken the first step towards crisis which he created for himself. Out of guilt of buying the iPhone, Amit locked his credit card and abstained for next two months. Meanwhile, he continued to pay EMI. Earlier, he used to save about Rs. 20,000, now he saved Rs. 15,000. As time passed, he got used to paying EMI and was still happy that he was still saving 30% of his salary. Once settled into iPhone EMI, he wanted to purchase a high performing laptop though he had one from college and one from office! He was unhappy with these as their performance was not optimal when he played games or watched HD movies. He thought that he deserved better since he was earning 50,000 and he will have lots of opportunity to save in future. In any case he thought that he will repay the loan from year-end bonus.

A few months later, his brother’s marriage got fixed. Our friend Amit was overjoyed and went on shopping spree, fully sponsored by his credit card EMI. Only when first bill arrived, Amit realized that his credit card EMI was now Rs. 25,000 and his net savings were ‘zero’, even after cutting his expenses by Rs. 5,000. He made it a point to repay from his year-end bonus.

But it seems it were testing times for Amit. Rumors of lay-off also increased at his office. Amit got scared and worked even harder – stayed for 16 hours in the office and even brought morning coffee for his boss, yes, he did everything to please his boss. But unexpected turn of events brought forward his lack of preparedness to meet sudden funds requirements (he had not saved for rainy day). He had to undergo a surgery which was not covered by his insurance. Amit approached his bank (which incidentally had also issued him the credit card) for a personal loan. It was then he came to learn that his CIBIL score was low due to over utilization of his credit card and that his bank will not lend him. He immediately borrowed from a local money lender at 4% per month to meet the medical expense. He thought that he will pay off the money lender from bonus and push the credit card debt loan for later. But to his dismay, he got a meagre year-end bonus, though the good news was that he escaped being laid-off, thanks to his hard work.

You must be wondering why Amit’s personal loan application was rejected when he was making regular EMI payments. Actually, while he was using his credit card, following was happening in background:

Credit card is terrible if one does not pay fully on time. Credit card EMI is actually, “Exorbitant Monthly Interest”. We continue to service the debt, but most of it goes towards interest payment as interest rates are very high, sometimes 50% per annum. High outstanding credit card balance leads to poor CIBIL and the person may not be able to get personal loans from banks and NBFCs as these primarily rely on CIBIL for unsecured personal loans. Being unable to get new loan, people will find themselves in deep financial trouble with no way to come out of it.

So, when we met during the weekend, Amit told me his situation and requested me to suggest him a way to come out of this situation, clearly telling me that he will not take loan from me. He felt bad for buying unnecessary stuffs on EMI. He also came to realize that his bank was charging about 40% interest rate on his credit card (ironically it was the same bank which had refused him a personal loan at 16% interest rate!). And was concerned how will he repay the money lender who was bullying him with dire consequences. Before, we get into solution which helped him to come out of this situation, let me explain mistakes which Amit did,

So, what should have Amit done?

One should use debit card instead of credit card as this reduces impulse purchase. Use credit card to meet only urgent requirements as it helps us fulfill our requirements in a jiffy. We must be careful to repay this immediately and not convert into credit card debt EMI. In case one is unable to repay credit card outstanding, the person should approach banks, NBFCs, and new age financiers such as i2ifunding to take personal loan and repay the credit card debt for this purpose. Here, I would strongly advise against applying for personal loans at multiple lenders. This adversely impacts credit score affecting one’s ability to borrow and leads to higher interest rates.

My recommendation to Amit which helped him to come out of the credit card debt trap:

I got him to REPAY THE CREDIT CARD DEBT  IMMEDIATELY along with loan from money lender. He refinanced it by a much cheaper loan from one of the digital lending platforms. This might sound new to many of our readers but is very common in countries such as the USA, UK etc. Credit card repayment loans or loans for debt consolidation are being widely used to come out of credit card debt trap. As a simple calculation, one can save about Rs. 20,000 a year on each one lakh by replacing credit card loan with another personal loan. Also, the loan tenor might be higher, helping you tide over the crisis.

Amit was able to come out of the immediate crisis. One year has passed since then and he has repaid the loan in full. He prepaid the loan with this year-end bonus. The platform from which he took loan did not charge any prepayment penalty. This was additional savings for Amit as several banks and NBFCs charge prepayment penalty on personal loan. On a lighter note, one good outcome of his high debt was that Amit was able win his boss! He is now one of the top performers! (but seriously, do want to try this approach to become a top performer?)

Hope the above was useful. If you have any further questions, please put it in the comment box below. I will respond at the earliest.

Best credit cards to maximize your savings in 2018
Credit Card – You thought it is free. Is it?