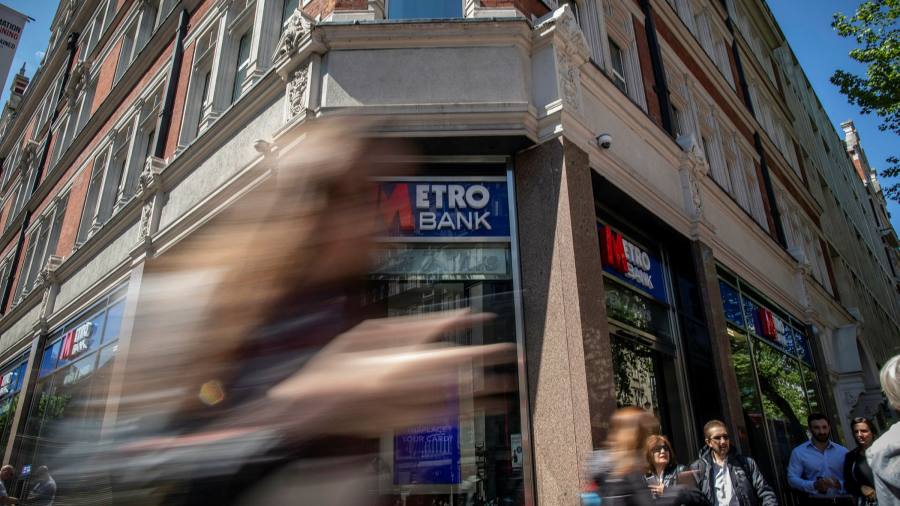 The bank said in a statement on Monday morning that the two companies had entered a period of exclusive discussions, but it cautioned that the talks were at an early stage. It provided no details on the potential value of any deal.

Metro said an acquisition of Ratesetter’s lending platform, which has originated around £3.9bn in loans since its foundation in 2009, “could accelerate the company’s stated strategy to grow its unsecured consumer lending book”.

John Cronin, an analyst at Goodbody, said an acquisition could have “compelling industrial logic”, depending on the price demanded by Ratesetter’s board, providing a “ready-made platform through which [Metro] could drive potentially quite profitable growth”.

Mr Frumkin took charge of Metro Bank earlier this year after a bruising 12 months that saw the bank’s share price drop almost 90 per cent in the wake of a reporting scandal and criticism of its governance.

In February, he outlined a four-year turnround plan based on slashing its previous focus on rapid expansion, and focusing on using its cheap current account deposits to fund more profitable new types of lending.

Metro Bank has been drawing back from its previous approach to expand its branch network and lend in the highly competitive residential mortgage market. It has already ventured into peer-to-peer lending after it struck a deal in 2015 with Zopa to channel customer deposits into loans through its platform.

Peer-to-peer platforms are digital sites that match lenders who want to earn interest to borrowers directly, and seek to operate in a more efficient way than traditional banking and with lower fees. However, the industry’s reputation was damaged by some high-profile failures at smaller platforms like Lendy and FundingSecure, and last year the Financial Conduct Authority introduced new regulations designed to limit risk and improve corporate governance in the sector.

RateSetter is one of the UK’s largest peer-to-peer lenders, and provides unsecured personal loans, property development loans and financing for used car dealers.

It has run into difficulty since the start of the coronavirus pandemic as investors rushed to withdraw their funds and demand for new loans tumbled. Last month, it said it would halve its interest rate payouts for investors for the rest of 2020 in expectation of a sharp increase in expected loan defaults.

One person close to the deal said the companies had yet to agree what would happen to the company’s £800m of outstanding loans, which are owned by individual investors rather than held on RateSetter’s balance sheet. Metro could look to buy out the retail investors, or only buy RateSetter’s platform for originating new loans.

Talks between the two firms were first reported by Sky News.

Shares in Metro Bank were roughly flat in early trading. The stock has been particularly volatile even among the wider market ructions over the past week, moving by more than 20 per cent on three of the past five trading days.