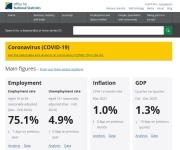 Just a tenth of the population holds 64% of total pension wealth in the UK, according to the latest figures from the Office for National Statistics.

Self employed workers were less likely to be paying into a pension, however, with only 20% saving in comparison to 80% of employees.

They were also more likely to say they could not afford to contribute to a pension with 39% of self-employed people surveyed by the ONS saying this in comparison to 26% of employees.

Self employed workers were also more likely to prefer alternative forms of saving, with 17% saving for retirement outside of pensions in comparison to 9% of employees.

A third of all those surveyed said they expected to be relying on the state for pension provision.

Having a low income or not working was the most common reason for not paying into a pension, with 54% of those not currently saving saying this.

Defined contribution pensions (26%) overtook defined benefit pensions (23%) as the most common vehicle for pension saving for the first time.

He said: “The figures lay bare the need not just for lower-paid workers to be given more assistance in making personal provisions to supplement the state pension. But also, and there is doubtless plenty of crossover, the gaping hole in pension saving among the self-employed, who are not nudged by auto-enrolment and don’t benefit from employer contributions.”

Between April 2018 and March 2020, 57% of UK residents below State Pension age were actively saving for retirement using private pensions. This compares to 43% who were saving before the introduction of automatic enrolment in 2012.