U.S. Recession 2022 | The Next Economic Downturn

Did you know that the ‘Great Recession’ of the late 2000s is not even the worst recession in history? According to researchers, we could look at another ‘Great Recession’ as early as 2022. The country seems to be returning to normal after a few years of economic uncertainty, and many experts believe that things will continue to get better over time. The question remains, however: How much better? Some economists are even predicting that the U.S. could enter its next recession as soon as 2022 — and if you listen to them, they may have a point. After all, some warning signs are pointing towards another downturn in the future.

So, read this blog further to know more about the upcoming U.S. Recession 2022 and its possible consequences on India.

Since the Great Recession of 2008, the world has been slowly recovering from a financial crisis that took down some of the major economies in the world. Economists are now predicting that the U.S. will have a new downturn in 2022. And a downturn in one country can easily spill over into other countries or industries if they rely heavily on exports or imports. For example, if a large number of companies were operating under high levels of debt at the same time, then their failure could hurt their suppliers and customers more than they would like to admit.

Also Read: What Are the Chances of US Recession Hitting India?

What Happens If There Is A Recession In The U.S.?

The United States is the driving force behind the global economy. When there is recession in the U.S., the economy starts performing poorly, which can significantly impact the rest of the world. The most important reason is that trade between other countries and the U.S. accounts for almost two-thirds of global Gross Domestic Product (GDP) or total economic output.

Moreover, a slowdown in the United States will have consequences across the global economy. A decline in demand for goods, services and capital will lead to lower profits for companies that rely on export markets for sales or earnings. That said, many countries outside the U.S. are also vulnerable to external shocks that can adversely impact their economies.

There’s no such thing as a recession that lasts forever. The economic recession cycle will eventually end in 6 months to 2 years, and the nation will emerge from the downturn. However, U.S inflation, businesses tend to cut back on spending when an economy is going through a downturn and scale back their workforce to reduce expenses. Therefore, a recession can cause significant financial strain for individuals, small businesses, and even large corporations.

Also Read: Tips To Get Your First Personal Loan From Banks and NBFCs in India

How Do You Survive A Recession?

A recession in one country can easily lead to reduced demand for exports and imports from other countries and result in an adverse chain reaction across the globe. Fortunately, there are ways to cushion the blow if you are prepared with other strategies to help you ride any economic downturns.

So, follow this guide on how to prepare yourself financially during an economic recession and return stronger than ever once it’s over.

First, let’s have a look at how to prepare ourselves for recession:

Now, let’s have a look at how you can survive a recession:

Effect Of U.S. Recession In India 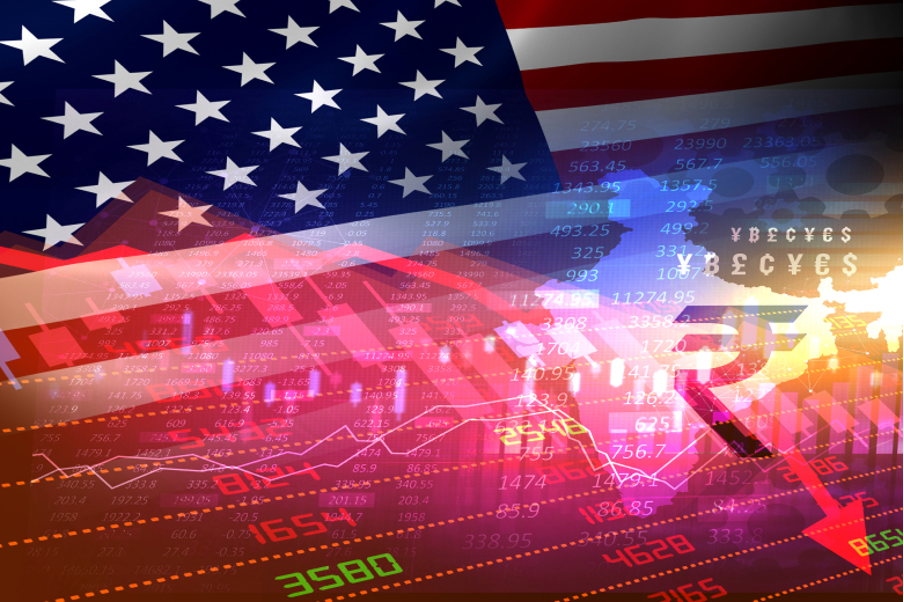 Now, Let’s look at the effect of the U.S. recession on India.

Experts say that the upcoming U.S. recession will reduce India’s growth trajectory. As per the forecast of Nomura, the Indian economy will see a slowdown in growth during a “prolonged mild recession” in the U.S.

According to the U.S. economics team, this mild recession in the 4th quarter of 2022 will cause tight financial situations, adverse consumer shocks, and disruptions in energy and food supply, ultimately weakening global growth prospects.

The exports in India will be negatively affected as it is highly dependent on E.U. and U.S. markets. Hence, there will be adverse effects on exports for a short period.

The slowdown in the U.S. economy will affect the exports in India. Due to this recession, the Indian National Rupees (INR) value will hit a record low against the dollar. As the Rupee value has already fallen over 6.5% this year, traders and strategists expect that the Rupee will touch levels of ₹80 against 1 U.S. dollar during the U.S. recession.

Also Read: Everything you need to know about Public Vs Private sector banks